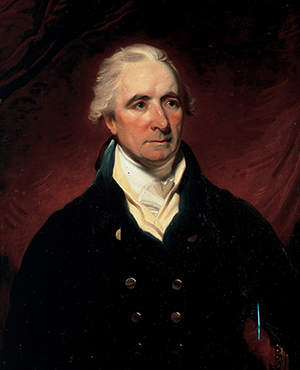 Born in Dublin’s Fishamble Street in 1746, but resident for most of his life in Tinnehinch, near Enniskerry, Co. Wicklow, Henry Grattan was the most noted, and certainly the most eloquent, of the eighteenth-century opposition ‘patriots’ in the Irish Parliament. He reached the height of his popularity with the concession of ‘legislative independence’ in 1782. Nineteenth-century constitutional nationalists would later refer to this, until its dissolution by the Act of Union in 1800, as ‘Grattan’s Parliament’, despite his almost permanent position on its opposition benches. In truth its ‘independence’ was a sham, and its inability to reform itself or grant Catholic Emancipation led to the polarisation of the 1790s and the bloody rebellion of 1798. By now a marginal figure, he spoke eloquently, but in vain, against the subsequent Act of Union. Less well known is his return to Parliament, this time in Westminster, in 1805, where he served until his death on 6 June 1820. To mark the bicentenary of his passing and to reassess his often misunderstood legacy, History Ireland editor Tommy Graham was joined, for an online Hedge School, by David Dickson, Patrick Geoghegan, Sylvie Kleinman and Tim Murtagh.
6 June 2020

This podcast is also available athttps://podcasts.apple.com/us/podcast/history-ireland/id1503109266 and or wherever you get your podcasts.